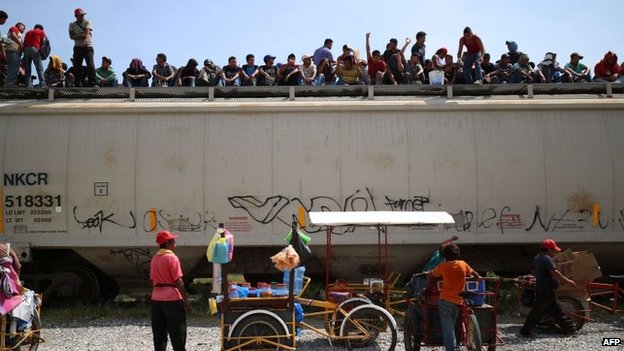 From the BBC: Guatemala, Mexico and the United States have reached a deal to try to prevent migrants from jumping onto a freight train in an attempt to reach the US, according to Guatemalan officials.

The three countries said they would establish more checkpoints.

Let’s look at this for a moment: The Mexican government, which until rather recently had some of the strictest immigration laws in our hemisphere, is allowing tens of thousands of foreigners to travel unimpeded thousands of miles through Mexican territory to reach the U.S. border, and “more checkpoints” are going to change that?

Particularly considering the money the cartels are making from all the human trafficking?

“The Chinese are paying $50,000, the Indians are paying $10,000 to $20,000, [for] all the Central Americans the average is about $7,000 and the Mexicans are, especially [from] southern Mexico, are paying $3,000, so it’s a huge, huge money event for the cartels, probably even more lucrative than the drug business,” Dr. Michael Vickers of the Texas Border Volunteers told Infowars.

President Obama’s executive actions on immigration did not begin with Deferred Action for Childhood Arrivals (DACA) in mid-2012. It began in 2011 with his announcement of “prosecutorial discretion” on deportations. A few months later the border patrol noted the first uptick in unaccompanied children at the border.

The campaign of misinformation goes on, but more and more questions add up; two days ago Pat wrote about Gov. Jindal’s questions,

He’d like to know, among other things, where the children are:

Jindal wants to know where the children are living, the timeline for determining their ultimate status and whether the federal government plans to kick in dollars for their education and health care. He also wants to know how the U.S. Department of Health and Human Services decided where to place them.

As the resources of the country as a whole and the states in particular are diverted to cope with this invasion, I leave you to ponder Mark Steyn’s words,

One of the reasons why so many Americans oppose amnesty and a “path to citizenship” for illegal aliens is because, even if one buys it in utilitarian terms, to accept that an honorable American identity can be born from an illegal act seems to mock the very essence of citizenship and allegiance.

Yet, putting aside the soon to be amnestied millions, it seems to me the deformation of law necessary to accommodate the armies of the undocumented is having a broader corrupting effect on the federal bureaucracy. For example, can you think of anything more risible than working for something called “US Customs & Border Protection”?

How’s that for a “train deal”?