Jessie Cardiff:   There it is- the game ball. All my life i’ve been waiting for this, it’s it’s a pocket hanger!

Every now and again in a sporting event, in a board game or in a political race you get a situation that’s a “gimme” an opening so good, so wide and so huge that all one has to do is reach out your hand and you can score.  Sometimes it’s a single basket, sometimes it’s a key moment and sometimes it’s the entire race.

Beto O’Rourke has provided the Democrat field with such a moment. 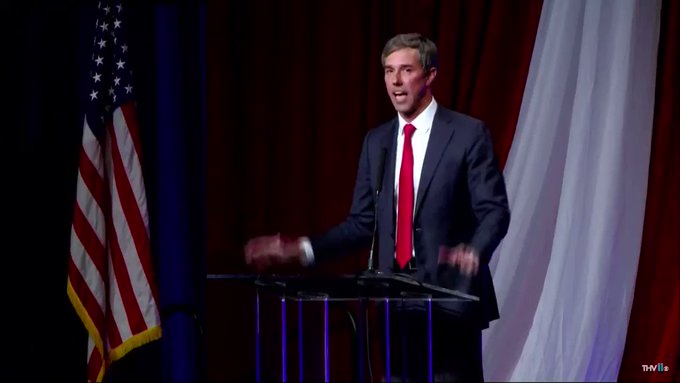 22.8K people are talking about this

This is a statement that is so blatantly false, so easily disproved by the facts and the historical record that only a desperate candidate trying to be noticed would state it. The folks at Twitchy are having a fun time with it, this line is the best of the batch:

754 people are talking about this

The real significance of this business isn’t the cry of a dying candidacy it’s the oppertunity it provides for every other Democrat in the race.

The Democrat party has a problem brewing in election 2020. In order to win the White house or the Senate in swing states or to retain the swing house seats picked up in 2018 candidates have to somehow divorce themselves from the crazy Socialism that Bernie is offering or the antisemitic and anti american rants of the Squad has been running out, which plays great with the whacked out base but is a loser among people living lives in swing districts dealing with reality.

The problem of how to convince people of said separation (real or not) is exacerbated by the President’s use of the bully pulpit to do all he can to maintain that link and show the American people the Democrat party as it is.

So problem, if you need to somehow show an image of moderation without actually moderating your views, what can you do? Well Beto O’Rourke has given them an out, by his statement.

While racism is, was and continues to be a problem in America  that we are all obliged to combat and condemn the foundation of this county is not racism rather it is liberty and it’s that base of liberty that has been and remains our best weapon against the scourge of racism.

It’s a perfect political statement, it says nothing about at all about the subject that can be contradicted, nor does it close the door for massive condemnations of almost anything a Democrat doesn’t like as racism.  Yet it sounds moderate enough that a Democrat saying it would make national headlines…

…and that’s why it likely won’t happen.

Thanks to an unhealthy addiction to social media and an unwillingness to confront the violent wacks within their base the slightest suggestion that the founding of the nation was not based on the charter of the Klu Klux Klan is likely to draw a massive reaction from the left mob that is the party base.  This is in contrast to the old days when such misdirection in pretending to be sane was considered a vital part of the Democrat election plan and allowed them to push though much of the radical ideas that the Democrats have managed to pass over the years.

This is a pocket hanger that no candidate would ever fail to sink twenty years ago, but I suspect not a single Democrat in the field has the courage to pick up that cue, let alone use.